Double Bass professor at the Guildhall School of Music and Drama,London  and the Royal College of Music, London.

prof. Rinat Ibragimov is known as Principal Double Bass of some of the world’s leading orchestras as well as a soloist and teacher.

Prof. Ibragimov  won the first prizes in the All Soviet Union Double Bass Competition (1984) and in the Giovanni Bottesini International competition in Parma, Italy (1989). 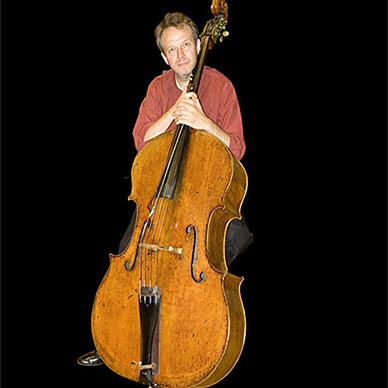 He studied at the Ippolitov-Ivanov College with Georgy Favorsky and at the Moscow Tchaikovsky Conservatoire with Professor Eugeny Kolosov.

He won the first prizes in the All Soviet Union Double Bass Competition (1984) and in the Giovanni Bottesini International competition in Parma, Italy (1989).

From 1983-1997 he was working as the principal double bass of the Bolshoi Theatre orchestra, the “Academy of Ancient Music”, “Moscow Soloists” and the “The Soloists of the Moscow Philharmonic.”

His recordings include a CD featuring the music for double bass by Giovanni Bottesini (released in Paris in 1995), a CD with works by Russian composers recorded with “The Soloists of the Bolshoi Theatre” (released in Moscow in 1991).

Having received his training as a conductor with Dmitri Kitaenko and Igor Dronov at the Moscow Tchaikovsky Conservatoire, Rinat was invited to become the conductor and artistic director of the “Moscow Instrumental Capella”, the post he held between 1995-1998. He still regularly collaborates with them both as conductor and soloist.

Rinat has been principal double bass with the London Symphony Orchestra for fourteen years.
Since 1999 he has been professor for d-bass at the Guildhall School of Music and Drama.