Work with a direktor – Mario Nikolov

WORK WITH A DIRECTOR – acting, vocal-dramatic interpretation, stage performance, musical, operetta.
Workshop for instrumentalists- how to act and perform on stage. How to overcome shiness and stage fright.

The Summer Art Academy Burgas is pleased to offer for each course one scholarship of 50% discount from the original course fee. Please provide us with a short CV and a YouTube link of your video recording with free choice of the programme no longer than 20 minutes. 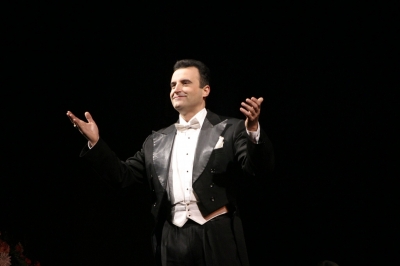 The tenor and director Mario Nikolov is one of the most popular faces of the classical music and stage art in Bulgaria. With his glamorous performances, he charmed audiences on three continents by touring repeatedly in Europe, Japan and America. His creative career on the stage of the National Musical Theater “Stefan Makedonski” in Sofia began in 1989, where he performed all the central tenor parts. Crowning in his singing career are the roles of Count Tasilo in “Countess Maritza”, Eisenstein in “Die Fledermaus”, Prince Edwin in “The Czardas Queen”, Barinkai in “The Gypsy Baron”, Paris from “Beautiful Elena”, Prince Rajami in “Bayaderka” “, Danilo from” The Merry Widow “, Count Tsedlau” Viennese Blood “, Duke Urbino from” One Night in Venice ” and many others.
Mario Nikolov studied opera singing at the Higher School of Music in Vienna and the State Music Academy “P. Vladigerov ” in Sofia. He graduated in Directing with a master’s degree from NATFA “Kr. Sarafov ” with a profile of musical and stage performances. In the current academic year he is completing another master’s degree – “Production and Creative Industries” at Sofia University “St. Kliment Ohridski ”. He specializes in the performing arts and cultural management.
“Die Fledermaus”, “Bulgarians of old times”, “The Czardas Queen”, “Countess Maritza”, “Gypsy Baron”, “One Night in Venice”, “Beautiful Helena”, “Viennese Blood”, “Ball in Savoy”, “Sluzhbogontsi”, the concert-performances “From Vienna to Broadway”, “Mediteraneo”, “Under the Sky of Paris” are just some of the hit productions of the director Mario Nikolov, which he staged many times in the musical theaters in Sofia, Veliko Tarnovo, Pazardzhik, opera theaters in Ruse, Burgas, Varna, Constanta / Romania / and others.
Mario Nikolov is a frequent guest at all majour festivals in Bulgaria, as well as at a number of international festivals in Romania, Russia, Ukraine, Germany, Belgium and others.
He is the winner of the prestigious award “Golden Lyre” for overall contribution in the field of music and performing arts, as well as the awards “Crystal Lyre” 2010 and “Crystal Lyre” 2014 for excellence in the field of music and performing arts. In 2013 he was awarded the “Musician of the Year” prize for active creative activity. At the end of 2015, he was awarded the Stage of the Year Award by the National Opera and Ballet Theaters and the Romanian Ministry of Culture for directing the operetta One Night in Venice at the Opera and Ballet Theater in Constanta, Romania.
For the period 2013-2015 Mario Nikolov is director of the State Music and Ballet Center Sofia / National Musical Theater “St. Macedonian ”and Arabesque Ballet /.
Since 2018 he has been the author, screenwriter and host of the weekly TV show for classical music and jazz on BNT1 – “Eternal Music”.