Julian Rachlin is one of the most renowned artistic personalities of our time. In his over thirty-year career, Mr. Rachlin’s multifaceted interests have taken him across the globe as a conductor, soloist, recording artist, chamber musician, teacher, and artistic director.

The Summer Art Academy Burgas is pleased to offer for each course one scholarship of 50% discount from the original course fee. Please provide us with a short CV and a YouTube link of your video recording with free choice of the programme no longer than 20 minutes. 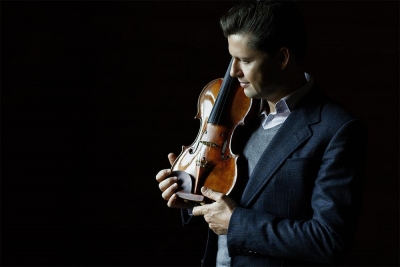 Prof. Julian RachlinViolin Professor
Julian Rachlin is one of the most renowned artistic personalities of our time. In his over thirty-year career, Mr. Rachlin’s multifaceted interests have taken him across the globe as a conductor, soloist, recording artist, chamber musician, teacher, and artistic director. As a violinist, Rachlin has shared the stage with virtually every major orchestra and conductor. A frequent presence on the conductor’s podium, his performances have thrilled audiences worldwide and his electrifying and sensitive interpretations have placed him at the forefront of classical music.

“Rachlin is the real thing,a virtuoso with heart and a champion´s bearing” Los Angeles Times, Julian Rachlin
Rachlin’s elegant and dynamic style has cemented his reputation as one of the leading conductors of his generation. Known for his meticulous rehearsal methods and superb musicianship, he has conducted the Chicago Symphony Orchestra, Israel Philharmonic Orchestra, Royal Philharmonic Orchestra, Konzerthausorchester Berlin, Russian National Orchestra, Moscow Philharmonic Orchestra, China Philharmonic Orchestra, Helsinki Philharmonic Orchestra, Royal Liverpool Philharmonic Orchestra, and the symphony orchestras of Vienna, City of Birmingham, RAI Torino as well as at the Grand Teton and Verbier festivals. Mr. Rachlin serves as Principal Guest Conductor of the Turku Philharmonic Orchestra, the Kristiansand Symphony Orchestra, and he is Principal Artistic Partner of the Royal Northern Sinfonia.
A major presence in the performing arts since the age of thirteen, Mr. Rachlin has spent over three decades cementing his reputation as one of the world’s premiere classical violinists. Recent highlights as soloist include appearances with the Munich Philharmonic and Los Angeles Philharmonic Orchestra under the baton of Zubin Metha, Mariinsky Orchestra with Valery Gergiev, Oslo Philharmonic Orchestra under Klaus Mäkelä, St.Petersburg Philharmonic Orchestra with Yuri Termirkanov, Boston Symphony Orchestra, Orchestra Filarmonica della Scala, Symphonieorchester des Bayerischen Rundfunks, Montreal Symphony Orchestra under Christoph Eschenbach and the Pittsburgh Symphony Orchestra with Manfred Honeck.
A strong proponent of expanding the relevance of classical music within today’s cultural framework, Mr. Rachlin’s projects with living composers and cross-median collaborations have brought together artists from a variety of disciplines, backgrounds and genres. He has worked closely with, and premiered works of, Krzysztof Penderecki, Giya Kancheli, Vangelis and Lera Auerbach. In 2000, he joined Mstislav Rostropovich in the premiere of Penderecki’s Sextet and Penderecki later wrote and dedicated the Concerto Doppio for Violin, Viola, and Orchestra as well as the Ciaccona for Violin and Viola to Mr. Rachlin. He has appeared in films, collaborated with digital instillation artists, and has worked with noted personalities, such as John Malkovich, Sir Roger Moore, and Gerard Depardieu.
Rachlin’s renowned music festivals reflect his joie de vivre and passion for bringing great artists and international audiences together in a celebration of music and art. He frequently collaborates with longtime musical partners, Martha Argerich, Evgeny Kissin, Denis Matsuev, Janine Jansen, Vilde Frang and Mischa Maisky. His untiring work and dedication for his “Julian Rachlin & Friends” festival in Dubrovnik, Croatia that ran for over a decade, has been recognized worldwide, and Mr. Rachlin has recently been appointed the 2021 Artistic Director of the Herbstgold-Festival at the legendary Esterházy Palace in Eisenstadt, Austria.
Dedicated to educating and supporting young talent, Mr. Rachlin founded the Julian Rachlin and Friends Foundation to help nurture the careers of extraordinary young musicians. Since 1999, Mr. Rachlin has served as a faculty member and professor at the Musik und Kunst Privatuniversität der Stadt Wien.
Mr. Rachlin is the recipient of numerous awards recognizing his work in the field of classical music, including as an Accademia Musicale Chigiana Siena Prize laureate, World Economic Forum “Young Global Leader”, and a UNICEF Goodwill Ambassador for the United Nations Children’s Fund. In 2013, Mr. Rachlin performed alongside Zubin Mehta and the Bavarian State Orchestra at the historic “Peace for Kashmir” concert at the Mugal-era Shalimar Gardens in Srinagar, Kashmir, the first ever performance by a Western orchestra in that region.
Born in Lithuania, Rachlin emigrated to Vienna with his family at the age of three, where he studied violin under the renowned Boris Kuschnir at the Musik und Kunst Privatuniversität der Stadt Wien and received private lessons from Pinchas Zukerman in New York City. Mr. Rachlin also completed conducting studies with Maestro Mariss Jansons, Sophie Rachlin and was mentored by Maestro Daniele Gatti.
Mr. Rachlin plays the 1704 “ex Liebig” Stradivari and a 1785 Lorenzo Storioni viola, on loan to him courtesy of the Dkfm. Angelika Prokopp Privatstiftung. His strings are kindly sponsored by Thomastik-Infeld. Mr. Rachlin’s critically acclaimed recordings can be heard on Deutsche Grammophon, Sony Classical, and Warner Classics.